Our eyes are in constant motion. Whenever you want to give them rest, try creating some interesting corners in such a way that our eyes stop for a moment before they proceed. I would like to call these focal points. They not only draw attention but deviate your eyes from viewing those areas that do not need attention. 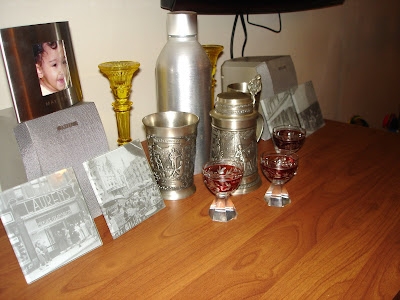 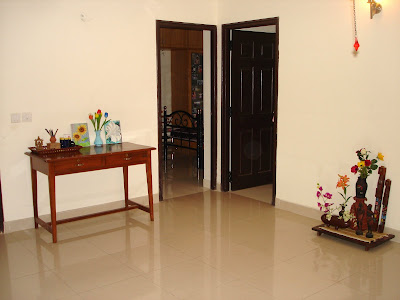 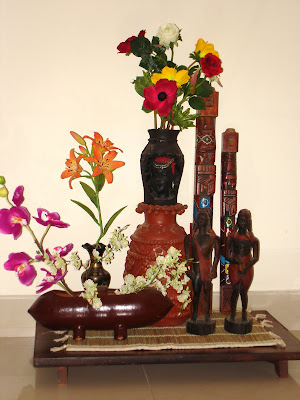 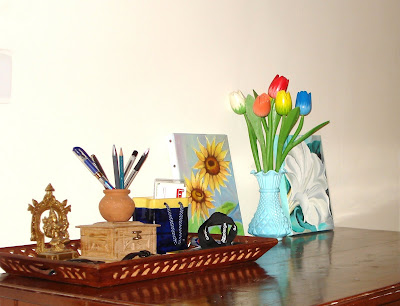 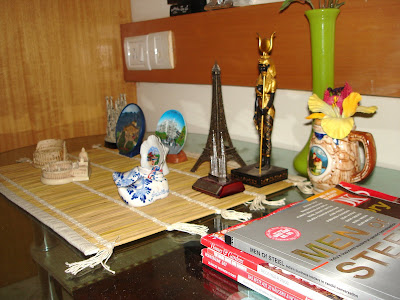 Hi readers,
It gives me immense pleasure everytime I introduce an artist on my blog. Today, I introduce Veda Murthy of Kai Kriye (means hand art in kannada). She has created this wonderful masterpiece which is a treat to the eyes. I am sure all of you who would like to create some theme based interiors would love this artwork. I am highly inspired by this creation. Please do take a look. Click on this link below.....I do not want to spoil the surprise by adding the picture here.......
http://kaikriye.blogspot.com/2009/11/mixed-media.html
Kai Kriye: Mixed Media!
Posted by Vasudha Narasimhan at 02:52 4 comments:

Hagia Sophia pronounced in Turkish as Ayasofya is a former Orthodox patriarchal basilica, later a mosque, now a museum in Istanbul, Turkey. Famous in particular for its massive dome, it is considered the epitome of Byzantine architecture and to have "changed the history of architecture. It was the largest cathedral in the world for nearly a thousand years, until the completion of the Seville Cathedral in 1520. The current building was originally constructed as a church between 532 and 537 A.D. on the orders of the Byzantine Emperor Justinian, and was in fact the third Church of the Holy Wisdom to occupy the site (the previous two had both been destroyed by riots). It was designed by two architects, Isidore of Miletus and Anthemius of Tralles. The Church contained a large collection of holy relics and featured, among other things, a 15m (49 foot) silver iconostasis. It was the seat of the Patriarch of Constantinople and the religious focal point of the Eastern Orthodox Church for nearly one thousand years. To read more, please click here....
The Sultan Ahmed Mosque (Turkish: Sultanahmet Camii) is a historical mosque in Istanbul, the largest city in Turkey and the capital of the Ottoman Empire (from 1453 to 1923). The mosque is popularly known as the Blue Mosque for the blue tiles adorning the walls of its interior. It was built between 1609 and 1616, during the rule of Ahmed I. Like many other mosques, it also comprises a tomb of the founder, a madrasah and a hospice. While still used as a mosque, the Sultan Ahmed Mosque has also become a popular tourist attraction of Istanbul. To read more, please click here.... Some pictures of both these and their interiors for you. 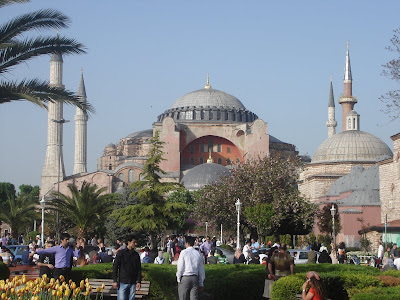 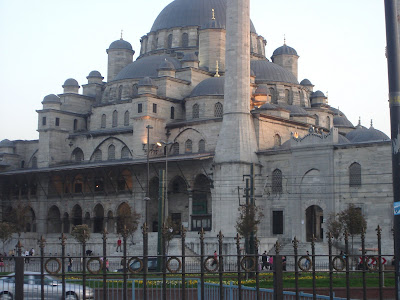 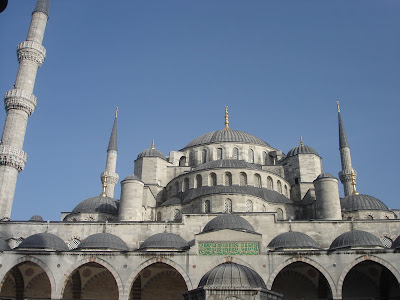 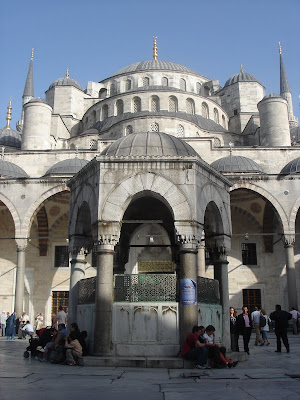 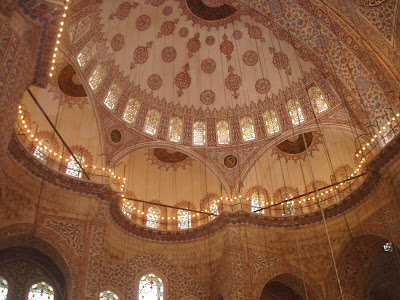 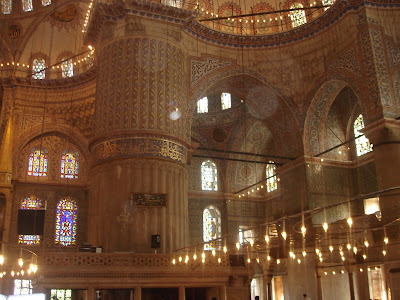 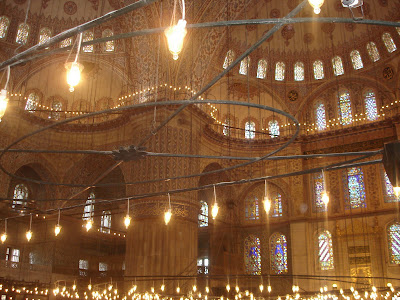 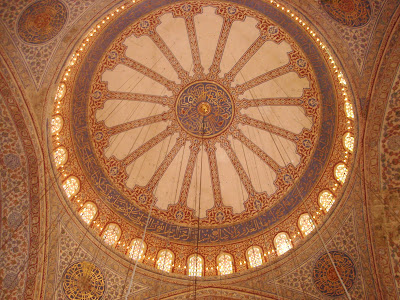 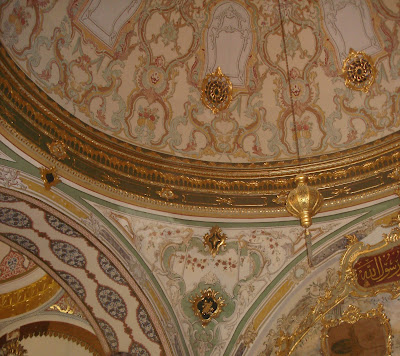 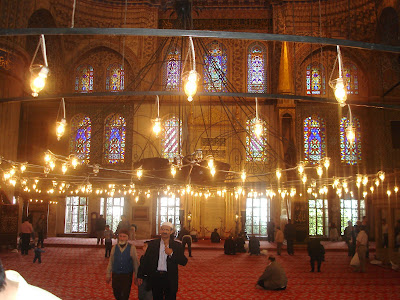 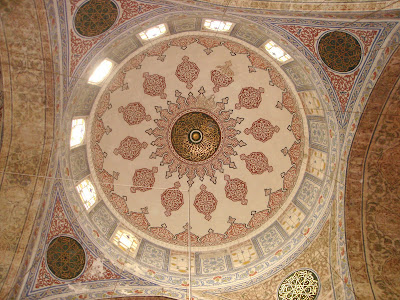 Grand Bazaar (Kapalicarsi in Turkish) is one of the oldest and largest covered markets in the world. It was built of wood after the Conquest of Istanbul around an old Byzantine building which became the part of the Old Bedesten (Old Bazaar) today, and got bigger and larger throughout the centuries with the addition of new sections and inns. The Bazaar initially consisted of two warehouses only, known as Inner Bedesten and Sandal Bedesten. Than open streets were covered with doomed roofs connecting separate buildings to each other. Today the bazaar covers an area of approximately 31thousand square meters (333thousand square foot) with its over 3000 shops (some even say 4000), 17 inns (Han), 61 streets, over 20thousand employees, 4 fountains, 10 wells, 2 mosques, several cafes and restaurants, change offices, a police station, and 22 gates. It resembles a giant labyrinth and can be a little complicated for the first-time visitor, but after a couple of visits there you can familiarize with it because streets are arranged almost on a grid plan, and shops tend to group themselves according to the type of goods they sell. To read more....click here... 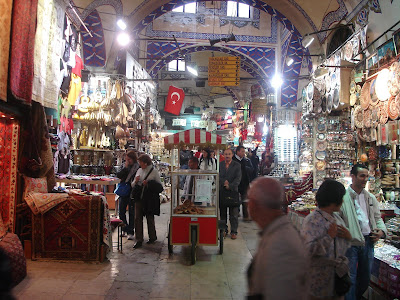 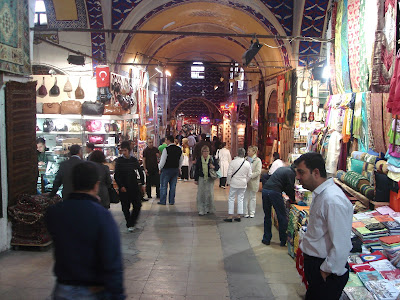 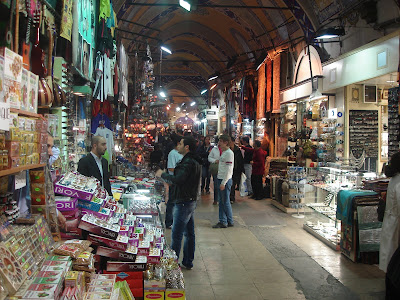 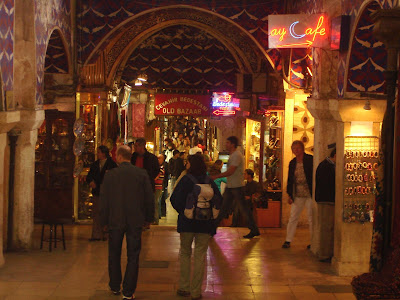 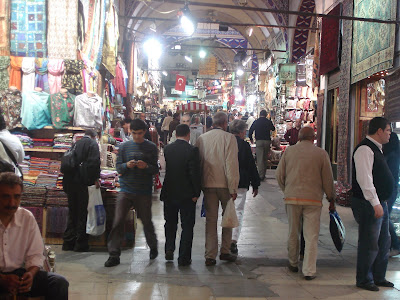 I hope you enjoyed all these pictures from my personal album. Are you interested in knowing more about turkish home decor....please do write to me and I shall be glad to assist you.....

Posted by Vasudha Narasimhan at 05:45 3 comments:

My love for Olioboard !!!

I simply love creating mood and concept boards. It enhances my creativy. I found this online tool for creating boards. My logo is also a collection of boards created on Olioboard

Strasbourg - A fine blend of French and German Cultures

CONCEPT DESIGN WITH ME.....

If you find my work interesting and would like my assistance in designing your space... Please contact me on... vasudha.dilip@hotmail.com

Makeover of a Kid's Chair

Join me to learn some simple, cost effective ideas for an instant makeover

For Customised Solutions on Kitchen Design... 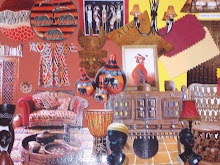 Choose a theme of your choice and we can design your space around it....vasudha.dilip@hotmail.com

When you have an old furniture and do not want to dispose it....think of ways to re-use it beautifully, contact me on vasudha.dilip@hotmail.com

For Do It Yourself Home Deco Accessories 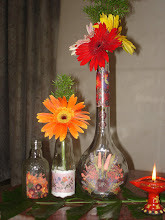 This blog focuses on displaying some interior design ideas inspired from all over the globe and designed by me. I will also enlighten all my readers with design ideas from different places gathered during my travel.....

Vasudha Narasimhan
I am a fun loving person who has a great passion for the most creative things in life. I always decorated my living space and would live in, feel and cherish that space. That is when, I started learning the art of decorating homes. I pursued a 2 year Diploma in Interior Design from Ireland and now I am a freelancer in this field. I teach in various design institutes and conduct workshops on specific design concepts. I love to learn as many languages as I can. I love to lead a tasteful life with a lot of travel and food. I can admire the smallest things in every object that I see....